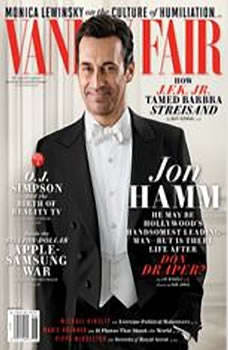 Vanity Fair is a cultural filter, sparking the global conversation about the people and ideas that matter most. With a dedication to journalistic excellence and powerful storytelling, Vanity Fair is the first choice-often the only choice-for the world's most influential and important audience. From print to social media, the big screen to the smartphone and now on audio, Vanity Fair is the arbiter of our era.This month's issue features: Cover Story: John Hamm starts his post-Don Draper career, beginning with next month's Million Dollar Arm Exclusive: Monica Lewinsky on the culture of humiliation Kennedys: Matt Berman recalls his growing friendship with JFK Jr. Royals: Pippa Middleton on secrets of Royal Ascot Dispatch: The story of the eleven photos from D-day that shook the world Investigation: Inside the billion-dollar legal battle between Apple and Samsung Plus: O. J. Simpson and the birth of reality TV