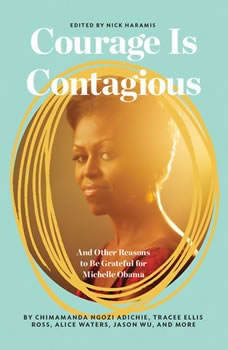 Courage Is Contagious: And Other Reasons to Be Grateful for Michelle Obama

A collection of essays celebrating the influential former first lady, by an array of acclaimed contributors and with a foreword by Lena Dunham

Michelle Obama’s legacy transcends categorization. Mrs. Obama was not only our first black first lady; she was President Obama’s equal partner in marriage and parenthood and a tireless advocate for women’s rights, education, healthy eating, and exercise. Her genre-busting personal style encouraged others to speak, to engage, even to dress as they wished. In an extension of his popular T, The New York Times Style Magazine feature, Nick Haramis has assembled nineteen essays from prizewinning writers, Hollywood stars, and political leaders—all of whom have been moved and influenced by Mrs. Obama’s extraordinary example of grace in power.

Here are original testimonials from Gloria Steinem, Chimamanda Ngozi Adichie, Alice Waters, and Charlamagne tha God, among others. Presidential biographer Jon Meacham supplies historical perspective. Actress Tracee Ellis Ross suggests that Mrs. Obama “provided an antidote to all the false representations of black women that have inundated us for centuries.” Anna Wintour and designer Jason Wu celebrate the former first lady’s impact as an international fashion icon. Two ninth-grade girls—one in training to be a boxer—talk about how Mrs. Obama has emboldened them to be themselves.

Here are some of the many facets of Michelle Obama as she continues to inspire us, a stirring reminder that the best of America once lived in the White House, embodied in one authentic, inclusive, and courageous woman.


Advance praise for Courage Is Contagious

“Courage Is Contagious reminds us of the fortitude, brilliance, grace, humility, compassion, and humor of a woman we were so crazy lucky to have serve as first lady. This is an exceptional celebration of a most exceptional American.”—J.J. Abrams

“The first lady planted a powerful new knowledge inside of each of us. When you read this book you realize it’s still in there and always will be.”—Miranda July, author of The First Bad Man and No One Belongs Here More Than You

“The diversity of the voices in Courage Is Contagious captures perfectly why Michelle Obama is so remarkable. If we can all see our best selves in her so vividly, how can we really be that different from each other? This glorious little book will give you goosebumps as it takes you on a journey celebrating one of the most important people alive.”—iO Tillett Wright, author of Darling Days