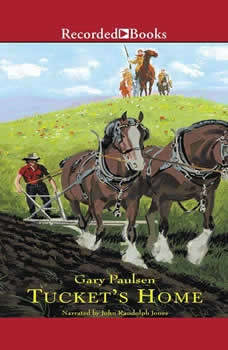 Fifteen-year-old Francis Tucket has been searching for his parents ever since Pawnees kidnapped him from their wagon train on the Oregon Trail. He owes his survival to a one-armed mountain man, Jason Grimes, who came to his rescue. Now Francis owes his life to the mountain man once again. Unfortunately, it's a debt he'll never be able to repay. Grimes is killed defending Francis and his young friends, Lottie and Billy, from a band of marauding robbers. As the three young people approach the end of their journey, they wonder if they can make it across the raging Columbia River. But a friendly young Indian offers Francis some good advice. Newbery Award-winning author Gary Paulsen skillfully juxtaposes exciting adventure with the dangers endured by pioneers on the Oregon Trail. This tale of heroism and courage is also a realistic look at the hardships endured by early settlers. John Randolf Jones' expert narration provides the perfect climax to this fifth and final book in the Francis Tucket saga.