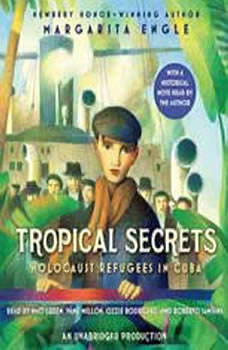 Last year, in Berlin
on the Night of Crystal
my grandfather was killed
while I held his hand.

Daniel has escaped Nazi Germany with nothing but a desperate dream that he might one day find his parents again. But that golden land called New York has turned away the ship full of refugees, and Daniel finds himself in Cuba.
As the tropical island begins to work its magic on him, the young refugee befriends a local girl with some painful secrets of her own. Yet even in Cuba, the Nazi darkness is never far away. . . .

At once deeply personal and utterly universal, Tropical Secrets is a stunning new history in verse from award-winning poet Margarita Engle.

This fictionalized first-person biography-in-verse of Miguel de Cervantes Saavedra follows the early years of the child who grew up to pen Don Quixote, the first modern novel. The son of a gambling, vagabond barber-surgeon, Miguel looks to his own i...

The Poet Slave of Cuba
by Margarita Engle

Together we belongedalong with countless othershuman beasts of burdento the proud Marquesa . . . Juan Francisco Manzano has never known any other life. Born into the household of a wealthy slaveowner in Cuba in 1797, he spent his early years by the ...

The Surrender Tree
by Margarita Engle

How can there bea little war?Are some deathssmaller than others,leaving motherswho weepa little less?Cuba has fought three wars for independence, and still she is not free. Her people have been rounded up in reconcentration camps, where there is alw...