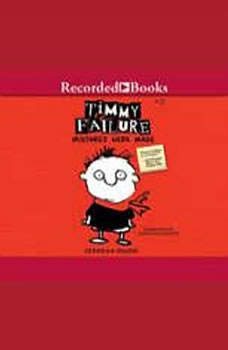 Timmy Failure: Mistakes Were Made

The New York Times bestselling cartoonist behind the nationally acclaimed comic strip Pearls Before Swine, Stephan Pastis has won raves for Timmy Failure, the hilarious first book in a new series for young readers. With the help of a polar bear named Total, Timmy Failure hopes to strike it rich by running the best detective agency around. The only problem is that our supremely confident hero is often more bumbling than brainy.

His name is Failure. Timmy Failure. And his detective agency is on the verge of global domination. Global riches. Global fame. And yet the gods keep throwing him curveballs: for starters, academic probation. The coveted Miracle Report is the key to ...

Danger Is Everywhere
by David O'Doherty

This fully illustrated, totally wacky handbook is about an everyman who is afraid of everything! Dr. Noel Zone, the greatest (and only) dangerologist in the world, is ready to teach readers how to avoid danger at all costs--from sneaky snakes posin...

Nikki Maxwell’s worst nightmare comes true in book nine of the #1 New York Times bestselling Dork Diaries series!A certain member of the CCP girls Dork fans know all about has gotten her hands on Nikki’s diary and has decided to share so...

The Misadventures of Max Crumbly 2
by Rachel Renee Russell

From #1 New York Times bestselling Dork Diaries author Rachel Renee Russell comes the second book in an all-new series about Max Crumbly and his daily ups and downs in middle school.When we last left our hero, Max Crumbly, he had crash-landed on top...

When some unexpected visitors show up at your door, things can get slimy…Strange things are happening in Noob Steve's town. It hasn't rained in weeks, but even stranger, mysterious blocks of slime seem to have become smitten with the adventur...

Nikki and her friends Brandon, Chloe, and Zoey are teamed up on an important mission in the tenth book in the #1 New York Times bestselling Dork Diaries series.Nikki has to hide seven ADORKABLE puppies from two parents, one nosy little sister, an en...

Everyone’s been rooting for Nikki Maxwell and her crush, Brandon—and fans will finally learn if they had their first kiss in this seventh book of the New York Times bestselling Dork Diaries series!Nikki’s juggling a lot this month....