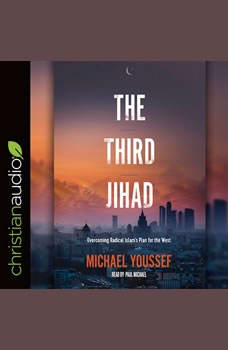 The Third Jihad: Overcoming Radical Islam's Plan for the West

Radical Islam has been waging war against our global civilization throughout history?and now, it’s closer than ever to American soil. Dr. Michael Youssef, a Coptic Christian who was born in Egypt and now leads a megachurch in America, knows from firsthand experience that radical Islamists have goals that many American Christians believe are “unthinkable.” In this book, he warns Western Christians that it doesn’t help to ignore what’s going on. There’s a third jihad underway, and its goal is to take over the West.

The Third Jihad is a call for Christians to defend their families, protect their nation, and boldly share the good news of Jesus with their communities?especially their Muslim neighbors.

Packed with surprising insights from history, compelling and dramatic stories, and a practical agenda that one person?or one church?can immediately put into practice to make a difference in the world. Rich in encouraging biblical principles and prophetic insights, The Third Jihad leads the reader to an empowering conclusion in our troubling (and even frightening) times.

Michael Youssef’s insights will inspire Christians to take their faith seriously, share their faith freely, and to truly be salt and light in a world of increasing darkness and decay.

They were just ordinary people--a loyal servant, a woman who desperately wanted a child, an old man who still had hope, and a young teenager who couldn't quite believe God's great love. Ordinary people who prayed extraordinary prayers to an ...

The Hidden Enemy
by Michael Youssef

What’s going on in our world? Why are suicide bombers attacking our cities? Why are shooters invading our workplaces and malls? Why are students attacking speakers at their colleges? Why are there two versions of the truth on the Internet and ...