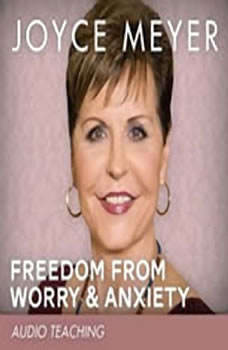 Freedom from Worry and Anxiety: Living a Life of Peace Over the Threat of Disappointment

Are you sick from worry? Grouchy about your circumstances? With this teaching from Joyce, you can break free from the chains of worry and anxiety.

The Jesus I Never Knew
by Philip Yancey

Everyone has their own version of Jesus--a soft and fluffy Sunday school flannelboard Jesus, a distant stained glass cathedral Christ, an all-powerful defender of the faith, a wise rabbi who never breaks a sweat. But who is Jesus really? Best-selli...

It's Okay Not to Be Okay
by Sheila Walsh

We've all experienced that moment where we wish we could start all over again. Failed marriages, lost friends, addictions, lost jobs. This is not the life we imagined. Yesterday can sometimes leave us stuck, sad, shamed, scared, and searching. S...

Stop Underestimating Yourself.You are capable of far more than you know.The most successful women are often not the most talented, the most gifted, or even the most experienced. What these women have is a knack for communicating that opens doors and...

9 Things You Simply Must Do
by Henry Cloud

A psychologist learns from his patients what really works and what doesn't! Many years of counseling have enabled Dr. Henry Cloud to observe people trying to work out the most important issues of life&#8212;issues like relationships, career, ful...

The Perfect You
by Dr. Caroline Leaf

There are a lot of personality tests out there designed to label you and put you in a particular box. But Dr. Caroline Leaf says there’s much more to you than a personality profile can capture. In fact, you cannot be categorized!In this fascin...

If
by Mark Batterson

If is a powerful little word. Some people are stuck in "if only," trudging through lives marked with regret. But God wants us to live lives marked with possibilities, with the "what if" attitude that looks forward to the future with confidence....

Sometimes we cannot know the difficulties people go through, unless they are willing to share their experiences. Such is the life of Pauline Joyce Hutchison, now, Joyce Meyer, Christian author, speaker, and president of Joyce Meyer Ministries. Joyce spoke often in her discussions about being sexually abused by her own father after he returned from World War II. As happens many times to such children, she married shortly after her senior year in high school, done usually to be able to leave the home where abuse happened. That marriage lasted only five years and was filled with unhappiness with a cheating husband. He even persuaded her to steal against her own better judgment. She says that she returned that money years later. After her divorce, her life was very tumultuous as she went from bar to bar aimlessly, until one day she met her future husband, Dave Meyer, an engineering draftsman. They were soon married, and remain married today.

Joyce relates her story of "a Jesus moment" when she was driving to work one day in 1976. She said as she drove she heard God call her name. All day she felt energized with the spirit of God, even as she participated in bowling at the local bowling alley that night.

Meyer began serving in a local church in St. Louis, leading an early morning Bible class. Eventually, the church became one of the most popular in the area, mostly due to Meyer's popularity as a Bible teacher. At the same time, she began a 15 minute radio broadcast on a local radio station.

In 1985, Meyer started her own ministry called "Life in the Word". By then, she was on six additional stations including Chicago and Kansas. Her husband Dave suggested she start a television ministry in 1993, which was the beginning of her current program, "Enjoying Everyday Life, which still airs today.

Meyer has written over 100 books, and has sold and given away billions of copies. In 2002, Hachette Book Group paid Meyer over $10 million for her catalog of independently released books. In 2005, Time magazine named Meyer among their "25 Most Influential Evangelicals in America". Meyer was ranked at number 17. "Joyce is and continues to be an incredible testimony of the dynamic, redeeming work of Jesus Christ."