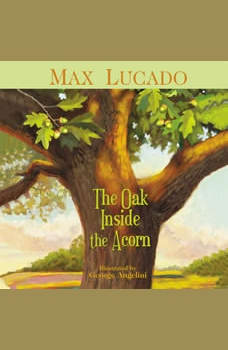 The Oak Inside the Acorn

<p>It was hard for Little Acorn to believe he would ever be a big, strong oak tree. Soon Little Acorn grew into Little Oak. But now what was he to do? He couldn't grow oranges like the orange tree or flowers like the rose bush. He just grew and grew until he became Big Oak, and his branches were big and strong-but still he didn't know what he was to do. Then one day Big Oak found that his strong branches were just right for a very special purpose. The Oak Inside the Acorn is the story of the miracle inside each of us. For within every child is the special person God created, just waiting to grow.</p>

I’m a big cat. I’m a strong cat. I’m not a scaredy-cat . . . except when . . .From New York Times bestselling author Max Lucado comes I’m Not a Scaredy-Cat, a hilarious new picture book to help kids manage their fears and wor...