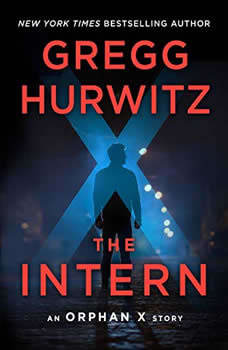 The Nowhere Man is a figure shrouded in secrecy—a near legendary figure who helps the truly desperate, those with nowhere else to turn who are lucky enough to be able to reach out to him. When darkness closes in, the Nowhere Man is your last, best hope.Before he was the Nowhere Man, Evan Smoak was a highly trained government operative known to a few as Orphan X. But he now lives by hiding in plain sight, keeping his head down and his eyes clear. So when a local summer intern for a tabloid news site finds herself trailing an aggressive reporter into a crime zone, things go terribly awry. The only person who can help her is a man with the background and the skills of the Nowhere Man.From New York Times bestselling author Gregg Hurwitz comes an electrifying, original story in his “nerve-shredding” internationally #1 bestselling Orphan X series.

Hurwitz has also written screenplays or scripts for major studios, and has also written for major TV networks. He also adds to his prestigious literary resume by being a bestselling comic book writer for Marvel and DC Comics. Basically, he is a very well-rounded writer.

Gregg is also on a mission to end political polarization on college campuses. He has had editorial pieces, concerning that subject, published in The Wall Street Journal, The Guardian, and others publications.

Hurwitz was the undergraduate scholar-athlete of the year at Harvard, recognizing his pole vaulting skills. As a Knox fellow, he also played soccer in England. He is married and lives in LA with his wife and two daughters.......and still plays a little soccer.