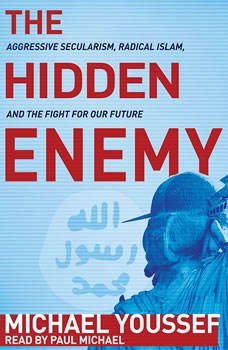 The Hidden Enemy: Aggressive Secularism, Radical Islam, and the Fight for Our Future

What’s going on in our world?
Why are suicide bombers attacking our cities? Why are shooters invading our workplaces and malls? Why are students attacking speakers at their colleges? Why are there two versions of the truth on the Internet and in the media?

Michael Youssef, popular teacher and Middle Eastern expert, explains in detail what’s troubling today’s world. Aggressive secularism is stripping our nation of the vestiges of truth, as many Christians are browbeaten into silence. What’s ironic is that secularism is actually opening the door to the “might makes right” nature of radical Islam. In a post-truth world, the most powerful voice wins.

What can save us and our children from this chilling future? Michael Youssef, in this groundbreaking audiobook, shows how we can win the war against aggressive secularism, beat back the threat of radical Islam, and build a brighter future for both ourselves and the next generation.

Be prepared for the times in which we live. Understand what’s happening. Stand up for a brighter and hope-filled future for our children.

Is Islam a peaceful and tolerant religion?For all the debate over Islam and its growing presence in the world, one thing is often overlooked: Islam is not a religion in the sanitized Western sense. It is, in contrast, an all-encompassing sociopoliti...

Western countries are ignorant of true Islamic values, says Nonie Darwish. Darwish is an Egyptian-American, former-Muslim human rights activist who is frustrated with mainstream America's talk of tolerance and assimilation. In Wholly Different, ...

The Search for Inner Peace
by Bilal Philips

The struggle to attain inner peace has been with humankind since the earliest times but what does it mean and is it even attainable? Are people being deprived of inner peace because of obstacles in the path, both real or perceived? How does a materi...