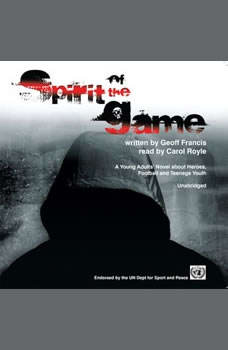 Spirit of the Game

A contemporary story about heroes, football and how a teenage youth eventually comes to reject the image of a modern day role model in favour of the reality of one from an earlier time. Through the story threads a theme which haunts and threatens the modern game of soccer. Racism and hooliganism rip at the heart of Jamie’s family infiltrating and disrupting not only daily life but society as a whole.At the centre of the story is the life, and love story of probably the games greatest ever ambassador. (Sir) Stanley Mathews. The man of whom Pele said “He taught us how to play”. The man who truly embodied the spirit of the game passes it on to a new generation.Endorsed by Desmond Tutu and the United Nations Department for Sport and Peace.Narrator: Carol RoyleA consummate actress on stage soon after joining the Royal Shakespeare Company she won the London Drama Critic’s Award for Ophelia in Michael Pennington’s acclaimed Hamlet. Carol became famous in Britain as Jenny Russell in the BBC sitcom Life Without George which ran for three series on British television. Her other TV work has included Heartbeat, Blake’s 7, The Professionals, Bergerac, Cribb, Crossroads, The Outsider, Casualty, The Cedar Tree, Ladies in Charge, Crime Traveller, The Bill and Doctors. Her film career includes roles in The Greek Tycoon and Tuxedo Warrior and she played theprominent role of Jessica in Blackeyes written by Dennis Potter.

Escaping the Light
by Taylor Dines

It all began with my first flight to Europe. Walking onto the plane I expected horrible food and uncomfortable seats that I wouldn’t be able to sleep in, but I expected good movies. When I got to my seat, I had a pillow, blanket, earplugs...

The 7 Habits of Highly Effective Teens by Sean Covey | Book Summary | Readtrepreneur(Disclaimer: This is NOT the original book, but an unofficial summary.)One of the most popular motivational books of all times has been transformed to adapt to teena...

Since 1996, the Teenage Diaries series has given tape recorders to young people around the country. They conduct interviews, keep audio journals, and record the sounds of daily life-usually collecting more than thirty hours of raw tape over the cour...

Acne Treatment for Teens: The Ultimate Guide to Cure Acne and Have Clear Skin for Teenagers
by Nadine C. Thuy

Are you a teenager suffering from acne or a parent of a teen who cannot shake it off?Have you tried various treatments and methods to try to rid your face of this blight?This book promises the cure you’ve been searching for!Most teenagers and ...

Making and keeping your new Friends for Kids
by Tony R. Smith

Do you have a problem making friends? Do you wish it was easy to meet new people? This is the book for you. Making friends is not easy, but its not hard either. This book will give you some situations and information to help you. Follow the informat...

Couples Therapy: Discover Simple Habits to Manage Jealousy in Your Relationship, Enhance Intimacy and Build a Deeper and Lasting Connection
by Andrew Manson

Are you terrified of seeing your marriage ending up in thousands pieces? Do you want to know how to regain affection and romance lost through years of ineffective communication? Then you just found the correct audio content for you!Nowadays, unfortu...

What if there was a way to discover the impact you were uniquely designed to have on others? As a young adult, you may have this feeling that is hard to put into words. It's like you know God made you for something more, but you aren't sure what tha...

In my senior year of high school, the drama in my life was growing. I had no clue how to handle it, or better yet make myself happy again. All I wanted to know was how to find the solution that felt lightyears away. I first tried to leave myself out...

Why I Didn't Rebel
by Rebecca Gregoire Lindenbach