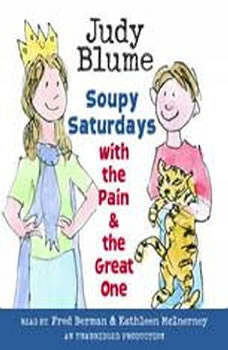 Soupy Saturdays with the Pain and the Great One

Series: Pain and the Great One Series

My sister's name is Abigail. I call her The Great One because she thinks she's so great. Who cares if she's in third grade and I'm just in first?

MEET THE GREAT ONE

My brother's name is Jacob Edward, but everyone calls him Jake. Everyone but me. I call him The Pain because that's what he is. He's a first-grade pain. I'll always know exactly what he's thinking. That's just the way it is. These seven warm-hearted stories will give young listeners a peek at how a brother and sister relate to each other.