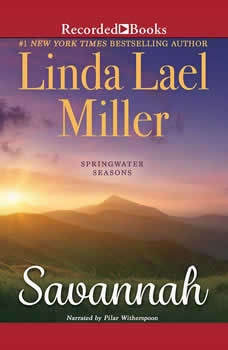 Linda Lael Miller returns to the world of her triumphant Western romance, Springwater, to create a delightful new series. Each thrilling Springwater Seasons novel takes place in the tiny stagecoach stop called Springwater, as it blossoms into a bustling Montana town. For a dance-hall girl who's never had much luck with dreams, Springwater may hold the happiness she seeks. Savannah Rigbey has made a living pouring whiskey and singing in saloons since she was sixteen years old. She's come to Springwater to take up her half-ownership of the local bar -- but her work begins before she even sets foot in town. On the stagecoach to Springwater, a young girl goes into labor -- and Savannah, with her level head and steady hand, aids a gruff doctor in abating a crisis. Dr. Prescott Parrish has never met a woman like Savannah. Despite her rouge and bangles, she is a virtuous -- though decidedly stubborn -- woman, who ignites his most infuriating emotions. But behind his prickly exterior, Pres harbors painful memories of the Civil War, heartache that may be soothed by a new and fulfilling love. Slowly, Pres and Savannah begin to see each other for who they truly are, with masks removed -- and with passion flaring unexpectedly....

"Rachel English as traveled to Springwater to take a post as the frontier teacher. Although the ramshackle schoolhouse -- and her half-wild pupils -- are not what she had envisioned, Rachel spiritedly makes the best of her new surroundings. But when...