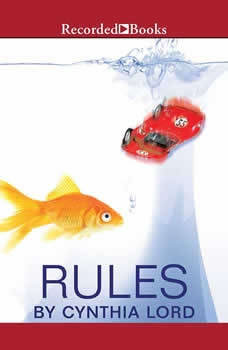 Rules, Cynthia Lord's Newbery and ALA Award-winning debut novel, is a tender look at the frustration, struggle, devotion, and hope experienced by families with autistic children. Catherine, a 12-year-old girl with big responsibilities, loves her autistic younger brother David and makes lists of rules she thinks will help him get by. But she often feels that her parents, focused on special care for David, forget that she exists, too.

A Handful of Stars
by Cynthia Lord

When Lily's blind dog, Lucky, slips his collar and runs away across the wide-open blueberry barrens of eastern Maine, it's Salma Santiago who manages to catch him. Salma, the daughter of migrant workers, is in the small town with her family for the ...

All He Knew
by Helen Frost

A novel in verse about a young deaf boy during World War II, the sister who loves him, and the conscientious objector who helps him. Inspired by true events. Henry has been deaf from an early agehe is intelligent and aware of langauge, but by age s...

Rose Howard has OCD, Asperger's syndrome, and an obsession with homonyms (even her name is a homonym). She gave her dog Rain a name with two homonyms (Reign, Rein), which, according to Rose's rules of homonyms, is very special. Rain was a lost dog R...

There are two files on Sahara Jones. The one the school counselor keeps is evidence that she's a fifth grader who needs special education. The other is the book Sahara is secretly writing, her Heart-Wrenching Life Story and Amazing Adventures.The la...

Bat and the Waiting Game
by Elana K. Arnold

In the tradition of Clementine and Ramona Quimby, meet Bat. Author Elana K. Arnold returns with another irresistible story of friendship in this widely acclaimed series starring an unforgettable boy on the autism spectrum.For Bixby Alexand...

Before The Lark
by Irene Bennett Brown

A #1 New York Times bestseller!Supreme Court Justice Sonia Sotomayor and award-winning artist Rafael Lopez create a kind and caring book about the differences that make each of us unique.Feeling different, especially as a kid, can be tough. But in t...

There’s a hot rod race today at noon! But before the hamster can enter the big race, he must first find his perfect hot rod. Where will he ever find a car small enough for a hamster? Of course—the One Dog’s Junk Yard! Dog tries t...