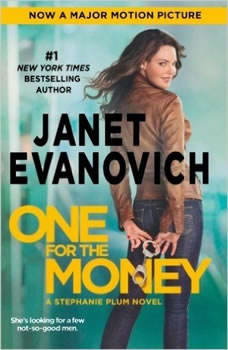 One for the Money: A Stephanie Plum Novel

Watch out, world. Here comes Stephanie Plum, a bounty hunter with attitude in the bestselling debut mystery that earned Janet Evanovich nominations for the Edgar, Anthony, Agatha, Shamus, and Macavity awards. She's a product of the "burg," a blue-collar pocket of Trenton where houses are attached and narrow, cars are American, windows are clean, and (God forbid you should be late) dinner is served at six.In Stephanie's opinion, toxic waste, rabid drivers, armed schizophrenics, and August heat, humidity, and hydrocarbons are all part of the great adventure of living in Jersey. Out of work and out of money, with her Miata repossessed and her refrigerator empty, Stephanie blackmails her bail bondsman cousin into giving her a try as an apprehension agent. Stephanie knows zilch about the job requirements, but she figures she can learn what it takes to catch a crook. Her first assignment: nail a former vice cop on the run from a charge of murder one -- who also happens to be the irresistible macho pig who took Stephanie's virginity at age sixteen. There's still powerful chemistry between these two, so the chase could be as interesting as it is dangerous.Witty, fresh, and full of surprises, One for the Money is a dazzling introduction to a sleuth you'll be hearing from again.

Three to Get Deadly
by Janet Evanovich

Stephanie Plum, the brassy babe in the powder blue Buick, is back, and she's having a bad hair day -- for the whole month of January.For starters, she's been given the unpopular task of finding Mo Bedemier -- one of the burg's most beloved figures, ...

A Is For Alibi
by Sue Grafton

When Laurence Fife was murdered, few mourned his passing. Plenty of people had reason to want him dead. But the police thought his wife Nikki - with motive, access and opportunity - was the #1 suspect. The jury thought so too.Eight years later and o...

This was a great start to the series. I usually don't like reading in first person, but it wasn't annoying in this book. It actually works better because Stephanie Plum is so funny. She is a normal woman that worries about her weight like we all do but likes to eat! She is single and lives in an apartment with her hamster. It is a very funny and fast read. I love her grandmother! Her grandmonther is so funny. I read these books when I am in between books.

This is a great series and this first in the series is one of the best! If you like a book that is a page turner and also keeps you laughing, this is the one!

This was a great start to a fabulous series. I love Stephanie Plum and her crazy family.

After many pressures from friends I finally pick up this series and I must say I'm glad I did. Stephanie was an enjoyable charcter who I could relate to. Her family is funny as all get out Stephanie takes on being a bounty hunter when she loses her job and the first person she goes after is Morelli. Trentons own playboy who suckered Stephanie into giving herself to him in the back of the bakery shop when they were younger. Clearly Stephanie has some unresolved issues with Morelli and the bounty on his head has made him even more desirable. Stephanie finds how desirable Morelli is to her a the funniest unravel in One for the Money. This book had me LOL all the way through. I can't wait to read ther others to find out what happens with Stephanie/ Morelli.