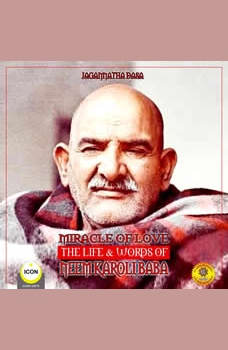 Miracle Of Love - The Life & Words of Neem Karoli Baba

* “Money should be used to help others.” ...* “Attachment is the strongest block to realization.” * “Love is the strongest medicine.” * “All action is prayer.”* “Whoever works for God, his work will be done by itself.” * “Keep God in your heart like you keep money in the bank.”Neem Karoli Baba known to his followers as Maharaj-ji - was a Hindu guru, mystic and devotee of the Hindu lord Hanuman. Here is the essence of his remarkable life and teachings. Produced by Devin Lawerence in VrndavanaMixed and assembled by Macc Kay in BangkokMusical consultant Alex Franchi in MilanProduction executive Avalon Giuliano in LondonICON Intern Eden Giuliano in Delhi Dedicated to the sacred memory of two pure devotees, H. G. Srimati Vrndarani Devi Dasi Maharani (1953-2017) and H. G. Srila Bhakti Hirday Mangal Niloy Gosvami MaharajSpecial thanks to author Brandon StickneyMusic By AudioNautix With Their Kind Permission©2020 Icon Audio Arts (P) 2020 Icon Audio Arts LLC

Uniquely among the worlda€™s religions, the central claims of Christianity concern not just timeless spiritual truths, but tangible historical events. At the heart of the of the Christian faith are things that are meant to have happened i...

The Bhagavad Gita - The Song Celestial
by Jagannatha Dasa

"Because the Bhagavad Gita ('The Song Of God') is spoken by the Supreme Personality of Godhead Bhagavan Sri Krishna, one need not read any other Vedic literature. One need only attentively and regularly hear and read Bhagavad Gita." A.C. BHAKTIVEDAN...

While the Beatles conquered the world, and therefore enjoyed the spoils of their conquest, they ultimately came to a rather acrimonious end. Here is the real, untold story of their unlikely climb to the heady heights of superstardom and beyond and t...