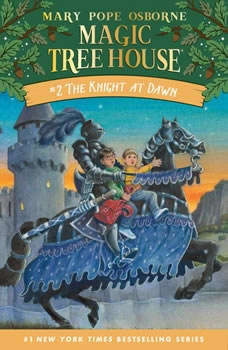 A castle with a secret passage! That's what Jack and Annie find when the Magic Tree House whisks them back to the Middle Ages for another wild adventure. In the Great Hall of the castle, a feast is under way. But Jack and Annie aren't exactly welcome guests!

The #1 bestselling chapter book series of all time celebrates 25 years with new covers and a new, easy-to-use numbering system! Jack and Annie head back in time to Venice, Italy in the 1700s. With the help of a research book, a book of magic r...

Sir Quinlan and the Swords of Valor
by Chuck Black

Two friends face the Dark Knight&#8217;s deadliest scheme, but only one knight has the courage to overcome. Sir Quinlan leaves his boyhood friend to serve the Prince, fighting a battle darker and more intense than any he&#8217;s ever known. ...

Laura Amy Schlitz wrote the Newbery Medal winner Good Masters! Sweet Ladies! for the students at the school where she is a librarian. The 22 monologues introduce readers to everyone in a medieval village, from the town half-wit, to Nelly the Sniggle...

Corbin the Hood
by Jeff Child

An archer and a bow, an evil villain and a temptress.This is what the king's messenger told him. Corbin was a rebel, he was someone who wouldn't bow to the oppressive rules the dictator imposed upon his village. And because of that, he was banished....

This entertaining bundle of kids’ books shows a range of books about knights, thrones, royalty, and sword fights. The funny anecdotes and interesting side notes remind some of Robin Hood with a twist, family feuds between two boys’ paren...

Orphaned Matilda is not at all pleased when she arrives at Blood and Bone Alley to become an assistant to Red Peg the Bonesetter. She is a religious, well-educated girl who can’t picture herself doing dirty chores or helping sickly patients. E...

Sir Rowan and the Camerian Conquest
by Chuck Black

A knight left for dead. A country on the verge of ruin. And an evil lord rising to conquer. Sir Rowan is the most decorated tournament knight in Cameria, but when he is attacked and left for dead, his world collapses. Betrayed and lingering at death...