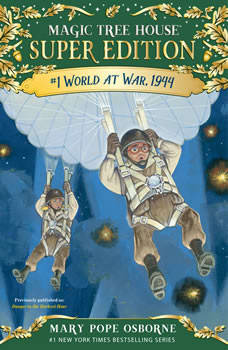 The first Magic Tree House® Super Edition—and Jack and Annie’s most dangerous mission ever in the scariest time the world has ever known—World War II. With a longer story and additional facts and photographs, this is a thrilling adventure no reader will want to miss!

When the magic tree house takes Jack and Annie back to World War II, Europe is in trouble! It is June 1944 and the brother-and-sister team must go behind enemy lines and crack a code that could save a lot of lives. But this is war, and Jack and Annie might just be in the wrong place at the wrong time. Can they save everyone before the great battle of D-Day begins? They don’t know, but they have to try!


Have more fun with Jack and Annie on the Magic Tree House® website at MagicTreeHouse.com.


Did you know there’s a Magic Tree House book for every reader? Find the perfect book for you: