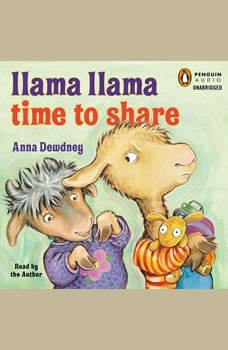 Llama has a sharing drama!

Build a tower. Make a moat.
Nelly's dolly sails a boat.
What can Llama Llama add?
Maybe sharing's not so bad.

Llama Llama has new neighbors! Nelly Gnu and her mama stop by for a play date, but Llama's not so sure it's time to share all his toys. Maybe just his blocks? It could be fun to make a castle with Nelly . . . But wait--Nelly has Llama's little Fuzzy Llama! The fun turns to tears when Fuzzy Llama is ripped in two, "all because of Nelly Gnu!" Mama comes to the rescue and fixes Fuzzy, but she makes it clear: "I'll put Fuzzy on the stairs, until you're sure that you can share."

Fun to read aloud and helpful to children and parents alike, Llama Llama Time to Share is for any child who needs a little encouragement in sharing.

This audio collection includes: LLAMA LLAMA MISSES MAMA It’s Llama Llama’s first day of preschool! And Llama Llama’s mama makes sure he’s ready. They meet the teachers. See the other children. Look at all the books and games....

Llama Llama and the Bully Goat
by Anna Dewdney

Llama Llama likes to sing. Gilroy laughs at everything.Llama sings out just the same.Gilroy says a not-nice name. Teacher has some things to say:calling names is not OK. Llama Llama is learning lots of new things at school and making ...