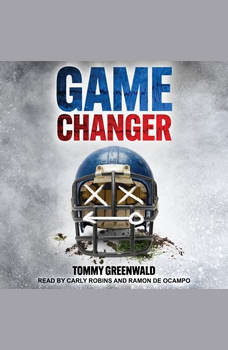 Thirteen-year-old Teddy Youngblood is in a coma fighting for his life after an unspecified football injury at training camp. His family and friends flock to his bedside to support his recovery-and to discuss the events leading up to the tragic accident. Was this an inevitable result of playing a violent sport, or was something more sinister happening on the field that day? Told in an innovative, multimedia format combining dialogue, texts, newspaper articles, transcripts, an online forum, and Teddy's inner thoughts, Game Changer explores the joyous thrills and terrifying risks of America's most popular sport.

Charlie Joe Jackson's Guide to Not Growing Up
by Tommy Greenwald

As graduation day approaches, Charlie Joe is starting to realize being a kid isn’t so bad after all, in this hilarious, final installment of the Charlie Joe Jackson series.Yes! Graduation day is finally here! Charlie Joe has been waiting for t...

Pete Milano's Guide to Being a Movie Star
by Tommy Greenwald

Pete Milano has always been the class clown and proud of it. What’s the point of having friends if you can’t make them laugh, right? Even if doing so has the unfortunate side effect of constantly getting him into trouble. But, for once, ...

My Dog Is Better Than Your Dog
by Tommy Greenwald

From the author of Charlie Joe Jackson’s Guide to Not Reading comes a humorous new series about a boy whose new dog may or may not be a crime-fighting vampire.Jimmy Bishop loves doing 3 things:1) Laughing at funny dog videos online,2) watching...

There's a crisis at Eastport Middle School! It appears that everyone has a boyfriend or girlfriend except . . . Charlie Joe Jackson??!? Yup-he's the only single guy out of all his friends. How is this possible? Even Pete Milano snagged a girl! Well,...