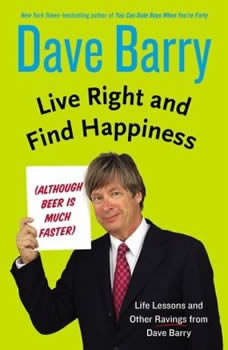 Live Right and Find Happiness (Although Beer is Much Faster): Life Lessons from Dave Barry

An uproariously funny examination of what one generation can teach to anotheror notfrom the Pulitzer Prize winner and New York Timesbestselling author of You Can Date Boys When Youre Forty and Insane City. During the course of living (mumble, mumble) years, Dave Barry has gained much wisdom* (*actual wisdom not guaranteed) and he is eager to pass it onto the next generation, the generation after that, and to those idiots who make driving to the grocery store in Florida a death-defying experience. In brilliant, brand-new, never-before-published pieces, Dave passes on home truths to his new grandson and to his daughter, Sophie (who will be getting her learners permit in 2015, the thought of which scares Dave silly). He explores the hometown of his youth, when all the men went to the city in suits and hats but still seemed to be having un-Mad Menlike fun, and how they turned into the neurotic hover-parents of today. He dives into everything from Google Glass (bottom line: You feel like an idiot) to why men hate birthdays and anniversaries; from How to Speak Spanish to firsthand accounts of the soccer craziness of Brazil and the just-plain-crazy craziness of Putins Russia, and a lot more besides. By the end, if you do not feel wiser, richer in knowledge, and more attuned to the universeit wouldnt be surprising. But youll have had a lot to laugh about!

Peter and the Starcatchers
by Dave Barry

In an evocative and fast-paced adventure on the high seas and on a faraway island an orphan boy named Peter and his mysterious new friend, Molly, overcome bands of pirates and thieves in their quest to keep a fantastical secret safe and save the wor...

The newest book in the New York Times bestselling “Barney Stinson” canon teaches prospective parents everything they need to know to have a legendary kid.“Congratulations!” You're about to have a kid? Well, Bro, you might be ...

The Worst Class Trip Ever
by Dave Barry

In this hilarious novel, written in the voice of eighth-grader Wyatt Palmer, Dave Barry takes us on a class trip to Washington, DC. Wyatt, his best friend, Matt, and a few kids from Culver Middle School find themselves in a heap of trouble—not...

My Inappropriate Life
by Heather McDonald

In her hilarious New York Times bestseller You’ll Never Blue Ball in This Town Again, Heather McDonald recounted her adventures as an unwilling virgin in Hollywood. Now happily married with three wonderful kids, she shows that life as a grown-...

My Shorts
by Brian Kagan

You don’t have to be Jewish to love My Shorts. But it doesn’t hurt! What would you get if the Seinfeld, Reiner, Crystal, and Kagan families got together for dinner? You’d get fatter, guiltier, and hoarser from trying to get a ...

Toddlers Are A**holes
by Bunmi Laditan

Toddler a**holery is a normal part of human development—not unlike puberty, except this stage involves throwing food on the floor and taking swings at people who pay your way in life. For parents of toddlers, it's a "you better laugh so you do...

Humor Deeper Than A Holler
by Lucius McCray

Enjoy another down-home anthology of humor, misadventure, and common-sense country insight. Travel from the farm to the city and the mountains to the coast. Join Lucius as he crosses paths with cabin loving bears and beer loving motorcycle enthusias...

Controlling My Kids With Comedy
by Michael Kornbluth

Controlling My Kids With Comedy, A Love Story is a series of love letters and joke poems in honor of unplanned fatherhood, the remote work American dream, comedy control and the birth of a family man. Books on fatherhood blow until now. Controlling ...

I Heart My Little A-Holes
by Karen Alpert

Popular blogger Karen Alpert shares her hysterical take on the many "joys" of parenting—I Heart My Little A-Holes is full of hilarious stories, lists, thoughts and pictures that will make you laugh so hard you'll wish you were wearing a diape...