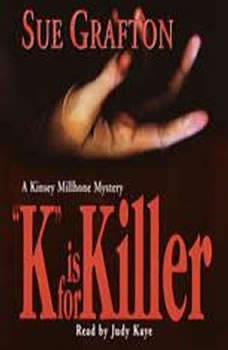 K Is For Killer

Investigating a murder after dark only makes the case spookier for Kinsey Mihone, Sue Grafton's savvy private investigator. But she's got little choice. Her client, the victim's mother, works the graveyard shift. And the victim, it turns out, led a secret life as a lady of the night.

So the normally spunky and sunny Kinsey visits mostly with night people to find clues to Lorna Kepler's death. But she also follows leads at a water district office where Kepler had a day job. The sleep loss dulls Kinsey's perceptions, and it takes two more murders to sharpen them.

Three to Get Deadly
by Janet Evanovich

Stephanie Plum, the brassy babe in the powder blue Buick, is back, and she's having a bad hair day -- for the whole month of January.For starters, she's been given the unpopular task of finding Mo Bedemier -- one of the burg's most beloved figures, ...

Guilty as Sin
by Tami Hoag

A cold-blooded kidnapper has been playing a twisted game with a terrified Minnesota town. Now a respected member of the community stands accused of a chilling act of evil. But when a second boy disappears, a frightened public demands to know: Have t...

Out of bail skippers and rent money, Stephanie throws caution to the wind and follows in the entrepreneurial footsteps of Super Bounty Hunter, Ranger, engaging in morally correct and marginally legal enterprises. So, a scumball blows himself to smit...

A contemporary American author of detective novels, Sue Taylor Grafton, was born in Louisville, Kentucky as the daughter of another detective novelist, C. W. Grafton. Even though her father had an influence, she has commented that her biggest influence came from author Ross MacDonald.

Sue received her bachelor's degree from University of Louisville in English literature, humanities, and fine art. Upon graduation, Sue worked as a hospital admissions clerk, cashier, and medical secretary. She wrote several novels that were not successful.

After moving into writing screenplays for television, Sue became interested in novels that carried a central theme through each title. She saw a book that alphabetized methods of murder, and immediately started writing what became her best-known works, "the alphabet novels". Each story is set around a fictional California town based on Santa Barbara. The novels are written from the perspective of a female investigator. After her G novel, Grafton was able to devote all of her time to writing her novels. She has given many refusals to those who wanted to buy her novels from which to make movies. She has no desire to work with Hollywood.