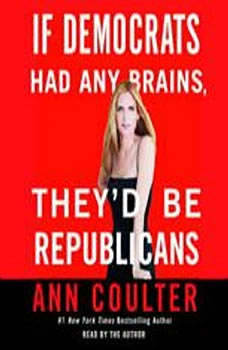 If Democrats Had Any Brains, They'd Be Republicans

“Uttering lines that send liberals into paroxysms of rage, otherwise known as ‘citing facts,’ is the spice of life. When I see the hot spittle flying from their mouths and the veins bulging and pulsing above their eyes, well, that’s when I feel truly alive.”

So begins If Democrats Had Any Brains, They’d Be Republicans, Ann Coulter’s funniest, most devastating, and, yes, most outrageous book to date.

Coulter has become the brightest star in the conservative firmament thanks to her razor-sharp reasoning and biting wit. Of course, practically any time she opens her mouth, liberal elites denounce Ann, insisting that “She’s gone too far!” and hopefully predicting that this time it will bring a crashing end to her career.

Now you can read all the quotes that have so outraged her enemies and so delighted her legions of fans. More than just the definitive collection of Coulterisms, If Democrats Had Any Brains, They’d Be Republicans includes dozens of brand-new commentaries written by Coulter and hundreds of never-before-published quotations. This is Ann at her best, covering every topic from A to Z. Here you’ll read Coulter’s take on:

• Her politics: “As far as I’m concerned, I’m a middle-of-the-road moderate and the rest of you are crazy.”
• Hillary Clinton: “Hillary wants to be the first woman president, which would also make her the first woman in a Clinton administration to sit behind the desk in the Oval Office instead of under it.”
• The environment: “God gave us the earth. We have dominion over the plants, the animals, the trees. God said, ‘Earth is yours. Take it. Rape it. It’s yours.’”
• Religion: “It’s become increasingly difficult to distinguish the pronouncements of the Episcopal Church from the latest Madonna video.”
• Global warming: “The temperature of the planet has increased about one degree Fahrenheit in the last century. So imagine a summer afternoon when it’s 63 degrees and the next thing you know it’s . . . 64 degrees. Ahhhh!!!! Run for your lives, everybody! Women and children first!”
• Gun control: “Mass murderers apparently can’t read, since they are constantly shooting up ‘gun-free zones.’”
• Bill Clinton: “Bill Clinton’s library is the first one to ever feature an Adults Only section.”
• Illegal aliens: “I am the illegal alien of commentary. I will do the jokes that no one else will do.”

If Democrats Had Any Brains, They’d Be Republicans is a must-have for anyone who loves (or loves to hate) Ann Coulter.

Author, Lawyer, Political Commentator, are just a few of the titles held by Ann Coulter. She was born in New York City, New York in 1961. She likes to say that she knew she was a Conservative since attending Kindergarten. Her parents were staunch Republicans and brought up their daughter and two sons in a very Conservative household. While other children were reading fairy tales, Ann was reading books like The Conscience of a Conservative by Barry Goldwater.

Ann had the privilege of having varying experiences, such as visiting her older brother in New York City, after her parents had moved to Connecticut. He had her read books on Conservatism, then quizzed her on them. If she passed the quiz, he took her bar hopping with his friends. She was 14 years old at the time.

Ann attended Cornell University where she helped found The Cornell Review......she received her Bachelor of Arts degree in history, and received her Juris Doctor from the University of Michigan Law School, and was editor of the Michigan Law Review. She was also President of the local chapter of the Federalist Society. She later served as a law clerk on the Senate Judiciary Committee.

The highlight of her career though has been publishing twelve books that have been on the New York Times best seller list. Her public appearances include television and radio talk shows, and talking on college campuses. She speaks about modern Conservatism, and the hypocrisy of modern American Liberalism. Her books include: In Trump We Trust: E Pluribus Awesome; Adios America-Never Trust a Liberal Over Three; How to Talk to a Liberal-If You Must; Crimes and Misdemeanors: The Case Against Bill Clinton, and several others.