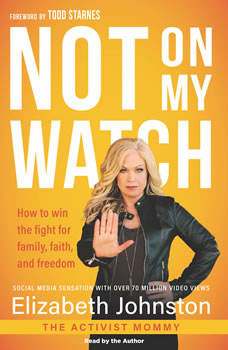 Not on My Watch: How to Win the Fight for Family, Faith and Freedom

News headlines point to a world that has gone stark-raving mad. Right is wrong, and wrong is right. Religious liberty is under attack. Gender identity and fluidity is not only accepted but encouraged. Same-sex marriage is embraced by many churches. Deviant sexual practices are taught in schools. Feminists march for freedom except when it relates to the 60 million babies aborted since Roe v. Wade. No more!cries Elizabeth Johnston aka the Activist Mommy, social media sensation with over 70 million video views. Johnston courageously defends the timeless truths of God's Word and inspires and encourages other Christians to unite in winning this war for our children, our morals, our freedom, and our culture. Foreword by Todd Starnes.

Read this book, devour every sentence, and then share it. . . . This is the kind of book that can rock the culture to its very foundation. -- Todd Starnes, Fox News Channel

Elizabeth's uncompromising commitment to speak truth and stand for righteousness . . . has elevated her to prominence at a time when our nation needs 'mama bears' the most! -- David and Jason Benham, best-selling authors

Not on My Watch captures the passion and calling of Elizabeth Johnston and everyone who values faith, family, and freedom. -- Mathew Staver, Liberty Counsel