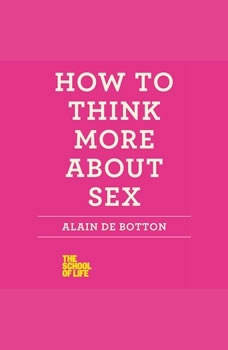 How to Think More About Sex

Series: The School of Life

THE SCHOOL OF LIFE IS DEDICATED TO EXPLORING LIFE'S BIG QUESTIONS IN HIGHLY-PORTABLE PAPERBACKS, FEATURING FRENCH FLAPS AND DECKLE EDGES, THAT THE NEW YORK TIMES CALLS "DAMNABLY CUTE." WE DON'T HAVE ALL THE ANSWERS, BUT WE WILL DIRECT YOU TOWARDS A VARIETY OF USEFUL IDEAS THAT ARE GUARANTEED TO STIMULATE, PROVOKE, AND CONSOLE. We don't think too much about sex; we're merely thinking about it in the wrong way. So asserts Alain de Botton in this rigorous and supremely honest book designed to help us navigate the intimate and exciting---yet often confusing and difficult---experience that is sex. Few of us tend to feel we're entirely normal when it comes to sex, and what we're supposed to be feeling rarely matches up with the reality. This book argues that twenty-first-century sex is ultimately fated to be a balancing act between love and desire, and adventure and commitment. Covering topics that include lust, fetishism, adultery, and pornography, Alain de Botton frankly articulates the dilemmas of modern sexuality, offering insights and consolation to help us think more deeply and wisely about the sex we are, or aren't, having.

The Architecture of Happiness
by Alain de Botton

The Architecture of Happiness is a dazzling journey through the philosophy and psychology of architecture and the indelible connection between our identities and our locations. One of the great but often unmentioned causes of both happiness and mis...

The History of Sexuality, Vol. 1
by Michel Foucault

Why has there been such an explosion of discussion about sex in the West since the seventeenth century? Here, one of France's greatest intellectuals explores the evolving social, economic, and political forces that have shaped our attitudes toward s...

Laying of Hands: When a Pastor Rapes
by Thorn and Rose Institute

A woman shares her anonymous true story of how she was raped by her pastor. Far away from her family and home, a young college girl joins a charismatic Christian fellowship group that meets at the pastor's home. Hoping to get closer to Jesus, the tr...

Sex and the Seasoned Woman
by Gail Sheehy

A seasoned woman is spicy. She has been marinated in life experience. . . . She can be alternately sweet, tart, bubbly, mellow. She can be maternal and playful. Bossy and submissive. Strong and soft. . . . The seasoned woman knows who she is. She co...

Soul Of Sex
by Thomas Moore

In our age of science and psychology, it's tempting to think of human sexuality in terms of biology and interpersonal relationships. But in The Soul of Sex, Thomas Moore regards sex as an experience of the soul and emphasizes the more human the...