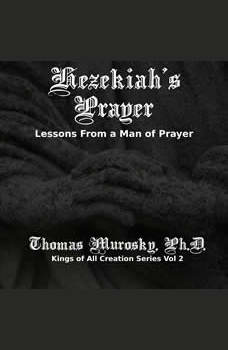 Hezekiah's Prayer: Lessons From a Man of Prayer

Series: Kings of All Creation

Who Is King Hezekiah

King Hezekiah was considered the most righteous king during Israel’s divided kingdom period. Both his father and son were also considered among the most wicked of kings, but sandwiched between them was Hezekiah, a man of prayer who would be tested by threat of destruction and the loss of life from illness. He humbly sought God in prayer and was delivered for his righteousness. In this book, we will learn about this king and more importantly, we will glean wisdom to help our own prayer life become strong. By the of this book, you will have an understanding of what God looks for in a person of prayer. We will examine some basic guidelines for effective prayer and learn to develop a habit of bringing our requests before the Lord.

Kings of All Creation

This series was written to learn New Testament principles from Old Testament kings and prophets in a way that is easy to digest. The period of the kings contain rich lessons that are applicable for today. We will explain the lives of kings and prophets in a way anyone can understand. Join us as we look through the life of the kings to learn how to obey Christ in our lives today.

Testing and Temptations
by Thomas Murosky

Our America is one where many Christians do not live life like Christ nor do they read the Bible. The average American Christian is not engaged in service and gives less to the cause of Christ than they do for their entertainment. As part of the chu...

The Art of Shallow Neighboring
by Thomas Murosky

When Jesus was asked to sum up the whole huge leather Bible into one simple phrase, he actually gave us two commandments. But modern evangelicals have short attention spans and only heard that we should love our neighbor. Christians everywhere have ...

Who is King JosiahKing Josiah inherited a kingdom in ruin and under the judgment of God. He heard a message of destruction from prophets and changed his ways, but quickly found out sincere faith is not enough! While cleaning up his kingdom and placi...