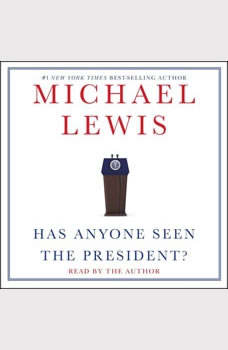 Has Anyone Seen the President?

Michael Lewis goes to Washington! Who better to shine a light into the shadows of the nation's capital in the age of Trump than the bestselling author of Liar's Poker and The Big Short?In this audio investigation—unavailable in book form—Lewis narrates his 2018 report from Washington originally published in Bloomberg View. From inside the White House press room—which Lewis describes as having “the cramped, uncared-for feel of a public toilet”—to a balcony overlooking “a sea of white people” in the Trump International Hotel, to Steve Bannon’s Capitol Hill townhouse, where he joins the former campaign CEO to watch the State of the Union address, Lewis takes listeners on an unforgettable behind-the-scenes tour.

Do I Stand Alone?
by Jesse Ventura

With jackhammer force and candor, Governor Ventura issues an urgent wake-up call to America -- a resounding indictment of our creeping national cynicism, and how our political system rewards mediocrity while turning a blind eye to accountability. I...

When he became a father, Michael Lewis found himself expected to feel things that he didn’t feel, and to do things that he couldn’t see the point of doing. At first this made him feel guilty, until he realized that all around him fathers...

Because We Say So
by Noam Chomsky

Because We Say So presents more than thirty concise, forceful commentaries on U.S. politics and global power. Written between 2011 and 2015, Noam Chomsky's arguments forge a persuasive counter-narrative to official accounts of U.S. politics and poli...