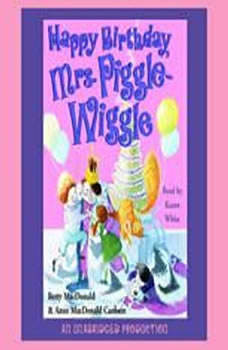 Mrs. Piggle-Wiggle is back with a brand-new bundle of wonderfully magical cures for any bad habit—from watching too much TV, to picky eating, to fear of trying new things. And while Mrs. Piggle-Wiggle is working her magic, the children are working some of their own, planning a boisterous birthday bash for everyone’s favorite problem solver!

On the Night You Were Born
by Nancy Tillman

Nate the Great and the Snowy Trail
by Marjorie Weinman Sharmat

Beginning readers are introduced to the detective mystery genre in these chapter books. Perfect for the Common Core, kids can problem-solve with Nate, using logical thinking to solve mysteries! Nate the Great has his work cut out for him. Rosam...

Horrible Harry and the Birthday Girl
by Suzy Kline

In the 34th Horrible Harry book, Mary's plans for a perfect birthday party go horribly wrong. Can her friends save the day? Mary has every part of her ninth birthday party planned: she and her friends will take the train to the park to see an outdoo...

*NOW A HIT TV SERIES ON DISNEY JUNIOR*Fancy Nancy thinks butterflies are simply exquisite. And that is why she can't wait for her friend Bree's Butterfly Birthday. It's going to be the fanciest birthday party ever!But when Nancy finds out she can't...

A birthday party sets the scene in this sweet and relatable story for anyone who's ever been the odd girl out. It's Ginger's birthday, and she has to invite all the girls in her class to her party, including Lyla Browning. Lyla isn't like the other...