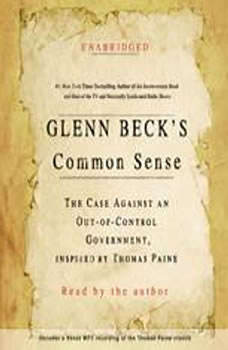 In any era, great Americans inspire us to reach our full potential. They know with conviction what they believe within themselves. They understand that all actions have consequences. And they find common sense solutions to the nation’s problems.  Thomas Paine was an ordinary man who changed the course of history by penning Common Sense, the concise 1776 masterpiece in which, through his extraordinarily straightforward and indisputable arguments, he encouraged his fellow citizens to take control of America’s future—and ultimately, her freedom.  Nearly two and a half centuries later, those very freedoms hang in the balance. And now, Glenn Beck revisits Paine’s powerful treatise with one purpose: to galvanize Americans to see past government’s easy solutions, two-party monopoly, and illogical methods and take back our great country.

The Republic
by Plato

Long regarded as the most accurate rendering of Plato's Republic that has yet been published, this widely acclaimed work is the first strictly literal translation of a timeless classic. This second edition includes a new introduction by Professor Bl...