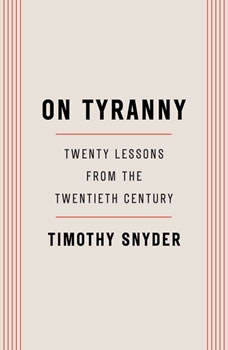 On Tyranny: Twenty Lessons from the Twentieth Century

The Founding Fathers tried to protect us from the threat they knew, the tyranny that overcame ancient democracy. Today, our political order faces new threats, not unlike the totalitarianism of the twentieth century. We are no wiser than the Europeans who saw democracy yield to fascism, Nazism, or communism.  Our one advantage is that we might learn from their experience.

The Best of Thom Hartmann Program features excerpts from some of Thom's classic Air America shows, including conversations with bestselling authors from across the political spectrum. Volume 2: Our Living History (90 minutes) a€“ Thom ...

In Citizenship: What Everyone Needs to Know, legal scholar Peter J. Spiro explains citizenship through accessible terms and questions.

Peggy Noonan's Wall Street Journal column has been must reading for thoughtful liberals and conservatives alike. Now she issues an urgent, heartfelt call for all Americans to support the next President. Because it is not the threats and challenges ...

The Best of Thom Hartmann Program features excerpts from some of Thom's classic Air America shows, including conversations with bestselling authors from across the political spectrum. Volume 1: We the People (90 minutes) focuses on the state of A...

The Young and the Restless
by Gurmehar Kaur

The 2014 Lok Sabha elections saw the involvement of India's youth like never before. They were debating inside classrooms, sitting for dharnas on the street, having conversations in offices and on social media. The election in 2014 saw 150 million y...

Letters to an American Christian
by Bruce Riley Ashford