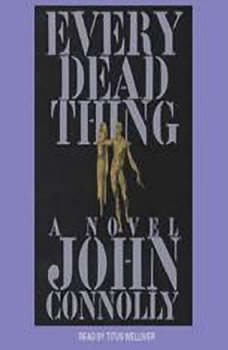 Have faith. I will find you.Former NYPD detective Charlie "Bird" Parker is on the verge of madness. Tortured by the unsolved slayings of his wife and young daughter, he is a man consumed by guilt, regret, and the desire for revenge.When his former partner asks him to track down a missing girl, Parker finds himself drawn into a world beyond his imagining -- one where thirty year old killings remain shrouded in fear and lies, a world where the ghosts of the dead torment the living, a world haunted by the murderer responsible for the deaths in his family, a serial killer unlike any other, a monster who uses the human body to create works of art and takes faces as his prize. But the search awakens buried instincts in Parker: instincts for survival, for compassion, for love, and, ultimately, for killing.Aided by a beautiful young psychologist and a pair of career criminals, he becomes the bait in a trap set in the humid bayous of Louisiana, a trap that threatens the lives of everyone in its reach. Driven by visions of the dead and the voice of an old black psychic who met a terrible end, Parker must seek a final, brutal confrontation with a murderer who has moved beyond all notions of humanity, who has set out to create a hell on earth: the serial killer known only as the Travelling Man.In the tradition of classic American detective fiction, Every Dead Thing is a tense, richly-plotted thriller, filled with memorable characters and gripping action. It is also a profoundly moving novel, concerned with the nature of loyalty, of love, and of forgiveness. Lyrical and terrifying, it is an ambitious debut, triumphantly realized.

Dublin, Ireland born author, John Connolly, like many other authors, has held many jobs before solely dedicating his professional career to writing. He worked as a journalist, a barman, a local government official, a waiter, and a department store (Harrod's) gofer. His studies included English and Journalism, and spent five years as a freelance journalist for The Irish Times newspaper. He wrote his first novel, "Every Dead Thing", which was published in 1999. This began the introduction of his now famous main character, Charlie Parker. Charlie is considered to be a sort of anti-hero type, a former police officer who was forever hunting the killer of his wife and daughter. A total of fourteen books were written (through 2016) with Charlie Parker as the main character. The last three books made a change from being told in the first person of Parker, to being told by a third party person's point of view.

Connolly also published other thriller novels outside the Parker series. One such novel was about a young boy's coming-of-age journey through a fantasy of life during World War II England. Film adaptations of some of his works have been procured and will be made for film in the future. The first to appear to audiences was somewhat based on one of his short stories, "The New Daughter", and starred Kevin Costner and Ivana Bauquero.

John Connolly's home base is still in Dublin, but he does divide his working time between there and the United States, which is where the Charlie Parker series takes place.