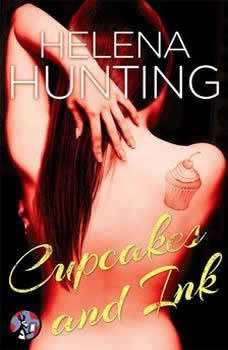 The prequel to Clipped Wings—“twisted, dark, incredibly erotic…a love story like no other” (USA TODAY bestselling author Alice Clayton)—this emotional tale follows Hayden and Tenley as they struggle to let go of their pasts and maintain an emotionally safe distance from each other.Tenley Page is looking for a new start: a new city, a new apartment, a new life. Her plan is to keep to herself and stay focused. But leaving her past behind and starting over isn’t as easy as she thought. And neither is maintaining her solitude. As Tenley settles into her new surroundings, she finds herself drawn to Inked Armor, the tattoo studio across the street. But it’s the gorgeous, dark-haired tattoo artist who captures her interest. There’s something about his severe beauty that captivates her—and not just in her waking hours.Covered in the ink he inscribes on other people’s skin, Hayden Stryker has made a career out of being a tattooist. He’s got his own business and a tight circle of friends. As far as he’s concerned, that’s all he needs. At least until his aunt, who owns the antiques and used book store across from his tattoo studio, hires a new employee. At first his intrigue is based on physical appeal; hot chick equals something nice to look at. But as he begins to catch glimpses of the fiery personality under the fragile, feminine exterior, his fascination with Tenley grows. Annoyed by his inability to control his fixation, Hayden decides the best way to cure him of the new obsession is to get to know the girl under her skittish façade.But like the ink he wears as armor, Tenley has the ability to get under his skin and stay there.

They’re serving up some red-hot revenge. A sizzling series from #1 New York Times bestselling author Rachel van Dyken.Blaire has never quite gotten over Jessie Beckett, the ex–NFL star whose kisses were hot enough to ignite the entire Ea...

Lucas Thorn wasn’t born a cheater. All it took was a single moment—say, a certain disastrous incident on the night before his wedding—and boom. Reputation destroyed forever and always. So now he owns it. He has a lady friend for ev...

Until Harry
by L.A. Casey

Coming home is hard for Lane. Hard because her beloved uncle Harry has died suddenly, but also because of him. Kale.Kale Hunt has been her best friend since childhood. But it was never that simple. He was Lane’s reason for leaving home and mov...

New York Times bestselling author Rachel Van Dyken kicks off a brand-new series in which romance is a game and love is a touchdown.Emerson just made her dream come true as a professional cheerleader for her favorite pro football team. But even thoug...

Luke Godfrey knows me only as Jade, the sweet stripper whose curves he is forbidden to touch. But when he is the surprise guest lecturer in my business class, he finally meets Abby Reynolds - the real me - even though I've done my best to avoid...

Maybe Not
by Colleen Hoover

Colleen Hoover, the New York Times bestselling author of Maybe Someday, brilliantly brings to life the story of the wonderfully hilarious and charismatic Warren in a new novella, Maybe Not.When Warren has the opportunity to live with a female roomma...

The year is 1992, and no one on the rock music scene is hotter than Kiro Manning, the lead singer of Slacker Demon. With a multi-platinum record, total ownership of the Billboard charts, sold-out concerts, and sinful amounts of money, Kiro can have ...

The Map That Leads to You
by J.P. Monninger

“Romantic and unforgettable.” —Nicholas SparksTwo strangers take the road less traveled...Heather Mulgrew’s world is already mapped out: she is going to travel abroad with her friends after college, come back to a great caree...

The Temptation of Lila and Ethan
by Jessica Sorensen

From the #1 New York Times bestselling author of the Ella and Micha series comes a gripping story of passion, pain, and the courage to love . . .THE TEMPTATION OF LILA AND ETHANOn the surface, Lila Summers is flawless: good looks, expensive clothes...

A great start of the series. Can't wait to read it. I can feel the attraction. My first ink story. ♡