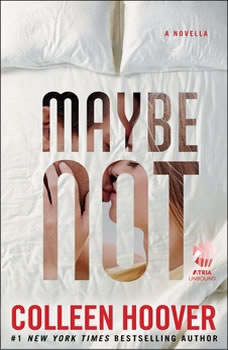 Colleen Hoover, the New York Times bestselling author of Maybe Someday, brilliantly brings to life the story of the wonderfully hilarious and charismatic Warren in a new novella, Maybe Not.When Warren has the opportunity to live with a female roommate, he instantly agrees. It could be an exciting change. Or maybe not. Especially when that roommate is the cold and seemingly calculating Bridgette. Tensions run high and tempers flare as the two can hardly stand to be in the same room together. But Warren has a theory about Bridgette: anyone who can hate with that much passion should also have the capability to love with that much passion. And he wants to be the one to test this theory. Will Bridgette find it in herself to warm her heart to Warren and finally learn to love? Maybe. Maybe not.

The Map That Leads to You
by J.P. Monninger

“Romantic and unforgettable.” —Nicholas SparksTwo strangers take the road less traveled...Heather Mulgrew’s world is already mapped out: she is going to travel abroad with her friends after college, come back to a great caree...

The year is 1992, and no one on the rock music scene is hotter than Kiro Manning, the lead singer of Slacker Demon. With a multi-platinum record, total ownership of the Billboard charts, sold-out concerts, and sinful amounts of money, Kiro can have ...

Inside Out
by Lia Riley

Lia Riley's Off the Map series comes to a stunning conclusion. Love is their best adventure yet . . . Talia Stolfi is deeply in love with the brooding Aussie surfer who stole her heart-but their infrequent letters only get her so far. While she fu...

Cupcakes and Ink
by Helena Hunting

The prequel to Clipped Wings—“twisted, dark, incredibly erotic…a love story like no other” (USA TODAY bestselling author Alice Clayton)—this emotional tale follows Hayden and Tenley as they struggle to let go of their p...

One of those books I wish I could read for the first time again . . . It's beautiful, heart-wrenching, and something that everyone needs to read for themselves." -BooksbyMigs.com on Upside Down It was only meant to last the summer . . . Talia Stol...

Until Harry
by L.A. Casey

Coming home is hard for Lane. Hard because her beloved uncle Harry has died suddenly, but also because of him. Kale.Kale Hunt has been her best friend since childhood. But it was never that simple. He was Lane’s reason for leaving home and mov...

Lucas Thorn wasn’t born a cheater. All it took was a single moment—say, a certain disastrous incident on the night before his wedding—and boom. Reputation destroyed forever and always. So now he owns it. He has a lady friend for ev...

They’re serving up some red-hot revenge. A sizzling series from #1 New York Times bestselling author Rachel van Dyken.Blaire has never quite gotten over Jessie Beckett, the ex–NFL star whose kisses were hot enough to ignite the entire Ea...

New York Times bestselling author Rachel Van Dyken kicks off a brand-new series in which romance is a game and love is a touchdown.Emerson just made her dream come true as a professional cheerleader for her favorite pro football team. But even thoug...

Colleen Hoover is an American author who has been categorized to be in the New Adult and Young Adult contemporary romance genre. Her published novels and novellas have all become a New York Times Best Seller. Her first novel, Slammed, was published in 2012 by Atria Books (a division of Simon and Schuster), Hopeless in 2013 was her first self-published novel. It went on to become one of the bestselling books of 2013.

Her 2015 novel, Confess, won the Goodread's Choice Award for Best Romance. It was also made into a filmed series by Awestruck. Katie Leclerc and Ryan Cooper star in the series. Another novel, Ugly Love, has also been adapted to film. Hoover's newest book is Without Merit, which is described as a contemporary romance.

Colleen Hoover founded The Bookworm Box which allows its subscribers to receive books from authors all over the world. The funds collected generate money for several different charities. The Bookworm Box project has donated more than $850,000 to those in need.