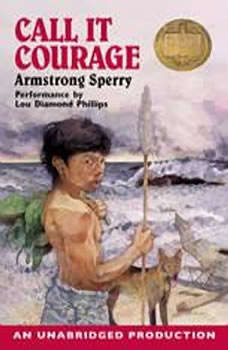 Mafatu's name means "Stout Heart," but his people call him a coward. Ever since the sea took his mother's life and spared his own, he has lived with deep fear. And even though his father is the Great Chief of Hikueru–an island whose seafaring people worship courage–he is terrified, and consequently, he is severely scorned.

By the time he is twelve years old, Mafatu can bear it no longer. He must conquer his fear alone. . . even if it means certain death.

This classic tale of a young boy's hidden strength has been a favorite of readers of all ages since its 1940 publication–now this exclusive audio preserves its original poignancy and splendor, and brings Mafatu to life for future generations of listeners.

The Wild Lands
by Paul Greci

In Paul Greci's The Wild Lands, Travis and his sister are trapped in a daily race to survive—and there is no second place.Natural disasters and a breakdown of civilization have cut off Alaska from the world and destroyed its landscape. Now, as...

Call It Courage
by Armstrong Sperry

Mafatu's name means Stout Heart, but the people of Hikueru call him a coward. He fears the sea and the powerful Sea God Moana because years ago, the powerful tides killed his mother. Such fear is shameful on this island, where the seafaring people r...