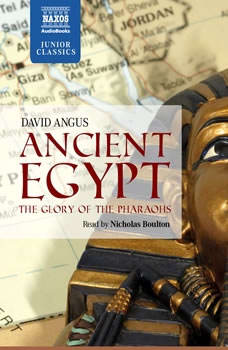 Ancient Egypt – The Glory of the Pharaohs

Ancient Egypt – The Glory of the Pharaohs tells us about civilisation under the pharaohs, of mysterious statues and tombs, incredible obelisks, the Sphinx… In this recording, the ancient Egyptian kingdom is brought to life in a way that fuels the listener’s imagination, teaching and entertaining in equal measure.

Here are the main stories from The Old Testament: Adam and Eve, Cain and Abel, Noah’s Ark, Abraham and Isaac, Moses, The Ten Commandments, David and Goliath, Jonah and the Whale, Daniel and the Lion’s Den and more. In these days where re...

Illness, disease and injury prompted the development of medicine from the earliest days of mankind: useful herbs, methods for treating wounds and even setting bones were passed down the generations by word of mouth. With the growth of civilization c...

Great Explorers of the World
by David Angus

Here are the stories of nine great adventures and the lives of the men who took part in them. They pushed back the frontiers of man’s knowledge of the world by their vision, courage and sheer doggedness. They were very different people &n...

The Egyptian Book of the Dead: The Papyrus of Ani in the British Museum
by E.A. Wallis Budge

The Egyptian Book of the Dead is unquestionably one of the most influential books in all of history. Embodying a ritual to be performed for the dead, with detailed instructions for the behaviors of the disembodied spirit in the Land of the Gods, it ...

The Vikings
by David Angus

Between the eighth and eleventh centuries Vikings stormed out of their Scandinavian homelands to raid and loot along the coasts of Europe. In old Norse to ‘go a’viking’ meant to take to sea in a long ship for an adventure. Sometime...

Pagan Origins of the Christ Myth
by John G Jackson

In this pamphlet Jackson sources the pagan origins of Christian doctrine with particular focus on the creation and atonement myths. Rooted in historical facts, Jackson's claims are steeped in research and demonstrate how Christianity synthesizes the...

The Story of Jesus
by David Angus

The four Gospels are the source material for this sympathetic account of the life of Jesus, from the traditional account of his birth to his death and resurrection. All the principal episodes are told – his baptism, the Sermon on the Moun...

The stories of the most popular ballets are told in refreshing style against the backdrop of the music written by Delibes, Tchaikovsky and Adam. Naxos Audiobooks draws on its own roots in classical music to present the definitive introduction for ch...