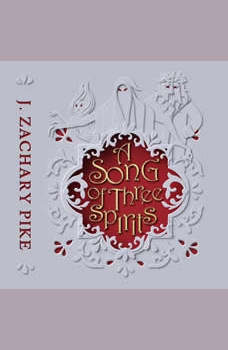 A Song of Three Spirits

When life gave Fenrir Goldson a second chance, he asked for a gift receipt.

Mr. Goldson is filthy rich. He’s also callous and cruel and hasn’t got a festive bone in his ancient body. Naturally, he’s due for a holiday haunting.

When his business partner, Bolbi Baggs, announces that they’re to be visited by three spirits, Mr. Goldson braces himself for a whirlwind tour of his past, present, and future.

Typically, a trio of time-traveling ghosts heralds a heartwarming tale of hope and redemption for the human race. Mr. Goldson, however, isn’t a member of the human race. He’s a Dwarf, and Mr. Baggs is a Halfling, and the adventure that’s about to take them across the enchanted world of Arth is anything but typical.

Holiday magic and economic realities collide in A Song of Three Spirits. It’s A Christmas Carol for the 21st century, with a dash of high fantasy. Listen to this hilarious satire of Charles Dickens’s classic today!