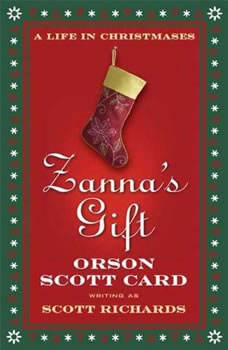 Zannas Gift: A Life in Christmases

From the pen of a masterful storyteller comes a touching and inspirational story of love, loss, and the true meaning of Christmas that will take its place beside Richard Paul Evans Christmas Box trilogy as a timeless classic that will be passed from generation to generation. When the Pullman family lost their eldest son, Ernie, to an unexpected illness just before Christmas, 1938, it was devastating to all of them, but especially to young Suzanna, their fouryearold daughter, who shared a special bond with her big brother. A strangely gifted child, Zanna loved to draw, but Ernie was the only one who was able to see the pictures in the curious patterns she made. Sadly, he did not live to see the Christmas drawing she had made for him that year. This is the story of that gift and how it inspired her and her whole family, generation to generation, to keep alive the spirit of imagination, hope, and love for Christmases to come. Zanna grew up to be a famous artist, but in the hearts of her children and grandchildren, her nieces and nephews, that last painting she made for her big brother was truly her most important work. Christmas after Christmas, as the long decades pass up to the present day, the author allows us to share in the warmth of a family bound together by the transcendent miracle of love. Zannas life, told in Christmases, will inspire you to keep alive your own family traditions, to share those loving moments with your children and grandchildren for years to come.