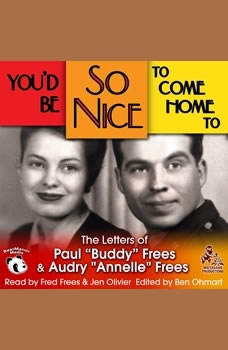 Youd Be So Nice to Come Home To: The Letters of Paul Buddy Frees and Annelle Frees

World War II was a difficult time for separated couples everywhere. Paul "Buddy" Frees would soon become one of America's most popular voice-over artists. Audrey "Annelle" Frees was the love of his life. One of them wouldn't make it through the war. This is the story of their all-too-short marriage, told in the letters they wrote to each other.With the exclusive cooperation of Annelle's family, author Ben Ohmart has painstakingly edited this moving collection of personal correspondence into a volume that paints a remarkable picture of two wartime lovers just beginning their life together.You'd Be So Nice to Come Home To is a companion book to Ohmart's popular biography Welcome, Foolish Mortals: The Life and Voices of Paul Frees.