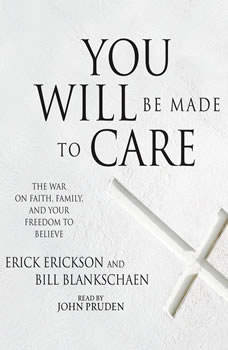 You Will Be Made to Care: The War on Faith, Family, and Your Freedom to Believe

Religious liberty is under attack in America. Your freedom to believe may not last much longer.

To all those who say they don’t care about the culture war, Erick Erickson has only one response: "The Left will not let you stay on the sidelines. You will be made to care."

Now the former Editor-in-Chief of RedState.com joins with Christian author Bill Blankschaen to expose the war in America on Christians and all people of faith who refuse to bow to the worst kind of religion—secularism—one intent on systematically imposing its agenda and frightening doubters into silence.

The book features first-hand accounts from Christians who've been punished for their beliefs and the perspectives of concerned thought leaders to make the case that Americans of faith can't afford to ignore what's happening—not anymore.

You Will Be Made to Care offers hope for preserving freedom of conscience with practical steps that believers, families, pastors, church leaders, and citizens can take to resist tyranny and experience a resurgence of faith in America.