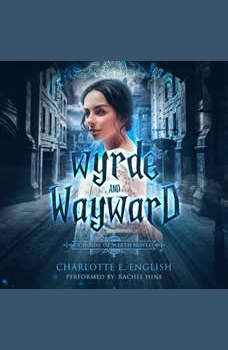 ‘If you had not already realised it, this is a very strange house you are come to.’

The Scions of the House of Werth are all born normal. It is what happens afterwards that sets them apart.

It is not easy being the most supernatural family in England. Nell talks to the dead; Lord Werth is too often to be found out in the churchyard at the dead of night; and the less said about Lord Bedgberry, the better.

Only Miss Gussie Werth has missed out on the family curse. She sups on chocolate, not blood; she's blissfully oblivious to spectres (except for Great-Aunt Honoria, of course); and she hasn't the smallest inclination to turn into a beast upon the full moon, and go ravening about the countryside.

But there's more to the Wyrde than meets the eye. When a visit to a neighbouring family goes spectacularly, deliciously wrong, Gussie's ideas about her own nature undergo a swift and serious change.

Far from being the most ordinary of the bunch, she may just prove to be the most disastrous Werth of them all...

Refined Regency manners meet gothic comedy to delightfully absurd effect in Wyrde and Wayward, a fresh new series from the author of Modern Magick and the Malykant Mysteries.