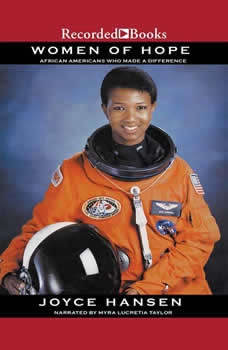 Women of Hope: African Americans Who Made a Difference

Award-winning author Joyce Hansen gives voice to 13 amazing African American women who have overcome adversity to make their mark in history. Each of these women will capture your heart and mind as you listen to their inspiring life stories. Hear about the life of acclaimed actress Ruby Dee and 1983 Pulitzer Prize winner Alice Walker. Meet the first African American woman to travel into space and the first African American resident neurosurgeon. These fascinating women remind us That with determination, we can overcome any obstacle. Myra Lucretia Taylor's heartwarming narration will draw you further into the lives of these astonishing women.