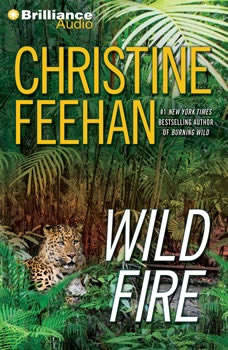 Called on a dangerous assignment, leopard shifter Conner Vega returns to the Panama rain forest of his homeland, looking every bit the civilized male. But as a member of the most lethal of the shifter tribes, he doesn’t have a civilized bone in his body. He carries the scent of a wild animal in its prime, he bears the soul-crushing sins of past kills and he’s branded with the scars of shame inflicted by the woman he betrayed.Isabeau Chandler is a Borneo shifter who’s never forgiven Conner—or forgotten him. The mating urge is still with her, and when she crosses Conner’s path, passions burn like wildfire. But as Conner’s mission draws Isabeau closer, another betrayal lies waiting in the shadows—and it’s the most perilous and intimate one of all.

How many times do we hear of anyone following exactly the career path that they always dreamed of? For author, Christine Feehan, the dream came true. She talks about how she always wanted to be a writer, as far back as she can remember. She began writing at a very early age, and required her sisters to read each of her works before being sent to a publisher. Currently, her daughters help with that job......to edit and critique the work before it is submitted for publication. That is called literally, keeping it all in the family.

Feehan has always loved family time. She came from a huge family and she and her husband, Richard, had a blended family with 11 children. She is a strong advocate of women helping each other. During one period in her life, she learned self-defense, then taught it to women who had been abused.

Feehan is a consistent #1 New York Times bestselling author, with over 70 published novels. These also include five series....... Dark Series, Ghostwalker Series, Leopard Series, Drake Sisters Series, the Sisters of the Heart Series, and Torpedo Ink. In her own words......."I've been a writer all my life......it is who I am. I write for myself and always have."