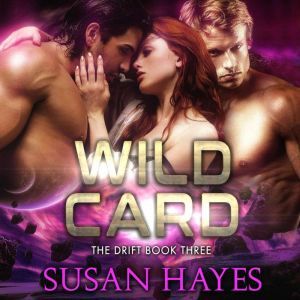 The game of love can change in a heartbeat when fate deals you a wild card.

Technician Lieksa Kiv saw firsthand what the corporations did to their cyborg soldiers during the Resource Wars. Her job: repair their damaged cybernetic components and send them back into battle. When a stolen kiss reveals the truth about her charges, Lieksa sacrifices everything to protect the cyborgs' secret, including a future with the two men she's fallen for.

Mack Darian and Dash Scudo aren't soldiers anymore. Inspired by the kindness of the woman who saved their lives and touched their hearts, they are defenders, instead. As Corporate Security, they're dedicated to protecting the citizens of The Drift from all threats, including each other.

When these three lives reconnect, the flames of passion burn white hot. But before they can hope for a future together, they must contend with old secrets and present-day challenges threatening to tear their world apart.