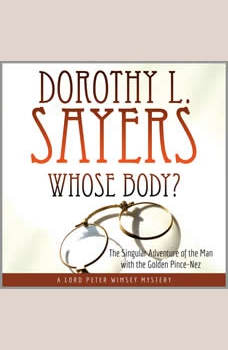 Whose Body?: The Singular Adventure of the Man with the Golden Pince-Nez: A Lord Peter Wimsey Mystery

Note: This edition of the first Lord Peter Wimsey novel is narrated in an American accent.Mild-mannered, inoffensive architect Alfred Thipps finds himself in big trouble when, in preparing to take his morning bath, he finds the tub already occupied by a dead body, wearing nothing but a pair of gold pince-nez glasses. Stolid, unimaginative Police Inspector Sugg is convinced the body is that of Sir Reuben Levy, a famous Jewish financier who disappeared the night before - waving aside objections that, as the body in the tub was uncircumcised, it couldn't be Sir Reuben - and promptly arrests Thipps and his maid for murder.Luckily for both of them, the dowager duchess of Denver takes an interest and asks her son, Lord Peter Wimsey, to help out. Working with his old friend Detective Charles Parker of Scotland Yard, who's been assigned to the Levy case, Lord Peter sets himself to the task of figuring out who the dead man in the bathtub is. He soon grows to suspect that the two cases are connected in a particularly sinister way....Lord Peter soon finds himself on the trail of a murderer of a particularly cunning sort, fresh from the perpetration of a shockingly cold-blooded and horrific crime.