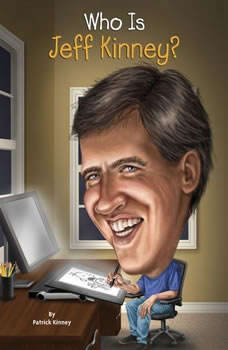 Who Is Jeff Kinney?

Even as a kid, everyone thought Jeff Kinney was talented. People loved his drawings, and when he went to college, his comic strip Igdoof was so popular that it spread to other universities! Still, Jeff faced challenges. His cartoons were rejected by syndicates that claimed his art was unprofessional. Then, an idea struck: Jeff would write a journal from the perspective of a child, illustrated with doodles just like a kid might do. And so, the Diary of a Wimpy Kid series was born--and it was a hit! In this biography, Jeff's brother, Patrick Kinney, provides a knowledgeable look at the life of this best-selling author/illustrator. From Jeff's childhood pranks to his job developing online games, kids will love the chance to learn more about the creator of the popular Wimpy Kid books.

Who Was Maurice Sendak?
by Janet Pascal

It seems entirely fitting that Maurice Sendak was born on the same day that Mickey Mouse first made his cartoon debut--June 10, 1928. Sendak was crazy about cartoons and comic books, and at twelve, after seeing Disney's Fantasia, he decided tha...

A Poem for Peter
by Andrea Davis Pinkney

On the 100th anniversary of his birth, a celebration of the extraordinary life of Ezra Jack Keats, creator of The Snowy Day. Andrea Davis Pinkney's powerful and poetic text tells the story of Ezra Jack Keats, who was born in Brooklyn in 1916, and gr...

No Map, Great Trip: A Young Writer's Road to Page One
by Paul Fleischman

Newbery Medalist Paul Fleischman reflects on his childhood with his award-winning father, Sid Fleischman, and details his own path to becoming a writer in this memorable book that is part memoir, part travelogue, and part reflection on craft and cre...

How did Jon Scieszka get so funny, anyway? Growing up as one of six brothers was a good start, but that was just the beginning. Throw in Catholic school, lots of comic books, lazy summers at the lake with time to kill, babysitting misadventures, TV ...

Through the Wardrobe
by Lina Maslo

As a child, Clive Staples Lewis imagined many things...heroic animals and knights in armor and a faraway land called Boxen. He even thought of a new name for himselfat four years old, he decided he was more of a Jack. As he grew up, though, Jack fou...

Who Was Roald Dahl?
by True Kelley

Roald Dahl is one of the most famous children's book authors ever. Now in this Who Was . . . ? biography, children will learn of his real-life adventures. A flying ace for the British Air Force, he was married to an Academy Award-winning a...

Who Was Dr. Seuss?
by Janet Pascal

Ted Geisel loved to doodle from the time he was a kid. He had an offbeat, fun-loving personality. He often threw dinner parties where guests wore outrageous hats! And he donned quirky hats when thinking up ideas for books-like his classic The Cat in...