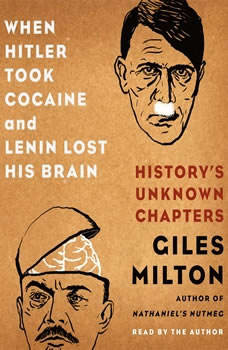 Obscure and addictive true tales from history told by one of our most entertaining historians, Giles MiltonThis program is read by the author, the host of the popular podcast, Unknown History with Giles Milton. The first installment in Giles Milton's outrageously entertaining series, History's Unknown Chapters: colorful and accessible, intelligent and illuminating, Milton shows his customary historical flair as he delves into the little-known stories from the past.There's the cook aboard the Titanic, who pickled himself with whiskey and survived in the icy seas where most everyone else died. There's the man who survived the atomic bomb in both Hiroshima and Nagasaki. And there's many, many more. Covering everything from adventure, war, murder and slavery to espionage, including the stories of the female Robinson Crusoe, Hitler's final hours, Japan's deadly balloon bomb and the emperor of the United States, these tales deserve to be told.

After a devastating run of German victories, Allied troops are beginning to halt Hitler’s advance. But far from the battlefields, Allied scientists are struggling.Intelligence reports put them a distant second behind the Germans in a competiti...

A superb work of intellectual history, this slim volume by one of today's foremost theologians takes you through the mind and times of Europe's firebrand, Martin Luther. Deeply convinced that man and God could have a spiritual relationship unmediate...