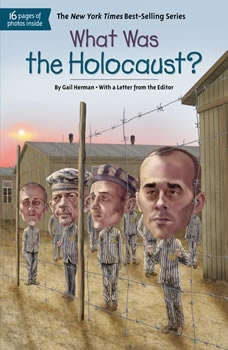 What Was the Holocaust?

A thoughtful and age-appropriate introduction to an unimaginable event--the Holocaust.

The Holocaust was a genocide on a scale never before seen, with as many as twelve million people killed in Nazi death camps--six million of them Jews. Gail Herman traces the rise of Hitler and the Nazis, whose rabid anti-Semitism led first to humiliating anti-Jewish laws, then to ghettos all over Eastern Europe, and ultimately to the Final Solution. She presents just enough information for an elementary-school audience in a readable, well-researched book that covers one of the most horrible events in history.

Includes a letter from the editor and series creator, Jane O'Connor.

Who Was Coretta Scott King?
by Gail Herman

The wife of Martin Luther King Jr., Coretta Scott King was a civil rights leader in her own right, playing a prominent role in the African American struggle for racial equality in the 1960s.Here's a gripping portrait of a smart, remarkable woman. Gr...

The Boy on the Wooden Box
by Leon Leyson

Leon Leyson (born Leib Lezjon) was only ten years old when the Nazis invaded Poland and his family was forced to relocate to the Krakow ghetto. With incredible luck, perseverance, and grit, Leyson was able to survive the sadism of the Nazis, includi...

The Nazi Hunters: How a Team of Spies and Survivors Captured the World's Most Notorious Nazi
by Neal Bascomb

A spy mission, a Holocaust tale, and a first-class work of nonfiction. In 1945, at the end of World War II, Adolf Eichmann, the head of operations for the Final Solution, walked into the mountains of Germany and vanished from view. Sixteen years l...