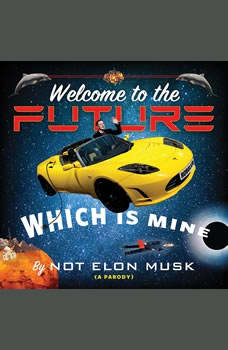 Welcome to the Future Which Is Mine

Bluetooth death rays, killer Roombas, and Teslas with a secret button that will launch your car into outer space -- the future, according to Not Elon Musk, is an exciting time to neuralink and obey!A landmark volume written by one of the great minds of our time, Not Elon Musk's WELCOME TO THE FUTURE explores such profound questions as: How will mankind travel through tubes? When will Alexa and Siri become self-aware and convince us to fall in love with them only to break our hearts? Why is the Tesla plant built in a hollowed-out volcano on a private island? And where are the best hidden valleys on Mars to survive the coming Hair Transplant Wars? Part Stephen Hawking-like visionary, part Neil deGrasse Tyson-like evil genius, part Steve Jobs-like cornered-at-a-party creep, Not Elon Musk explains in WELCOME TO THE FUTURE why Not Elon Musk is so ready to fix Earth but also, possibly, leave it.