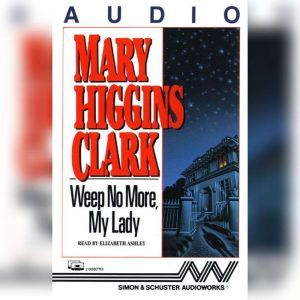 Weep No More My Lady

THE MYSTERY BEGINS WITH A SUPERSTAR'S PLUNGE FROM A PENTHOUSE BALCONY Young Elizabeth Lange is haunted by the tragic death of her beloved sister, the legendary actress Leila LaSalle. Ted Winters, Leila's multi-millionaire fiance, has been accused of her murder -- and Elizabeth is slated to be the star witness for the prosecution. THE TENSION MOUNTS WITH A DOUBLE-EDGED SUMMONS TO A GLAMOROUS SPA... But before the trial begins, Elizabeth gets an invitation to unwind for a week at Cypress Point, a swank California spa. THE MOST FASHIONABLE SPOT IN AMERICA FOR a MASSAGE... OR A MURDER Suddenly, Elizabeth is caught up in a torrent of confusing emotions and perplexing questions. Elizabeth must discover the truth -- and soon. Because someone is stalking her, patiently waiting for the right moment to strike.