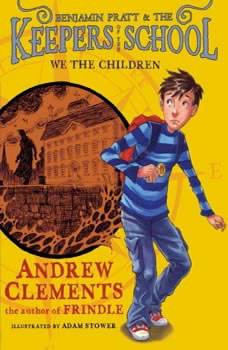 Series: We the Children #1

The Boston area has been hit hard by a new wave of commercialization. Historic sites have yielded to the lure of big bucks, and now, C. Robinson Fetchley, a shady developer, is planning to make history by breaking ground for his tenth entertainment mega-park—but he needs to get his hands on the Duncan Oakes School first.  While everyone else in town is in love with this garish future, young Benjamin Pratt is in love with the past, the real past. He is one of those rare middle schoolers who already knows what he wants to do in life: he wants to be an historian. And, right now, the only thing he likes about his educational experience is Oakes School itself. It’s so old, it’s so interesting. It’s so full of stories. But what can he do? He’s just a 6th grade kid who likes American history.  Then, one day at school Ben discovers an old leather pouch, really old—just the way he likes it. Inside is a parchment scroll written by three students. The date on the note is 1791. They call themselves The Keepers of the School and it turns out, the 18th century keepers are not the only secret groups that have existed at Oakes School.  This first in a six-book series follows Ben and his sarcastic friend, Jill as they uncover a remarkable history and use it to protect the future of their school.